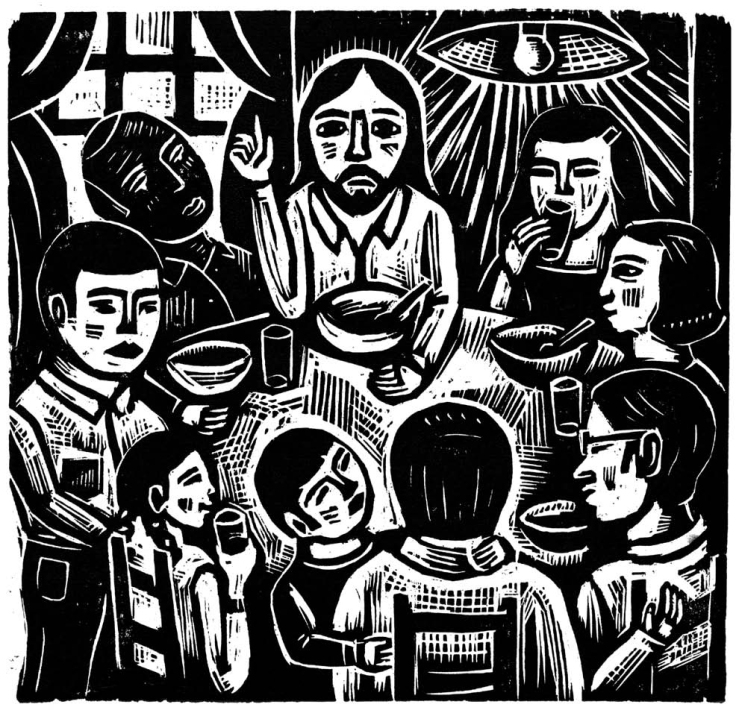 Living near Easttown in SouthEast Grand Rapids, it is nearly impossible to navigate the sidewalks without occasionally seeing Rick Beerhorst, the bespectacled artist who created the image above. It is an image that immediately evokes a sense of togetherness. Truly, the open table is a place where love abounds; both love to the familiar and love to the stranger can be manifest over food and drink. A dear friend gifted this print to my current home. It hangs on a wall still, and it prompted a reflection.

Recently, my fiance and I won the bid on a home that is for sale as a short sale. This is a simple word for a complicated concept, but suffice it to say it is likely that we will be able to move on the deal after 2-4 months. Then, after we are married and move in, we will have a place to establish a place of hospitality in a new and just-married fashion. As we approach the day, there are countless concerns and worries alongside the abounding joys and triumphs. Last night we talked about financial concerns and vocational questions. We also talked about the support and affirmation we consistently receive. Above the din, a clear concern for offering hospitality rises again and again to the surface in our conversations.

All of that aside, we, as Christians, are reminded once again presently of the most subversive event of history: the Resurrection. Indeed, Lent 2013 is over and we now rejoice in the Easter reality, the triumph of Jesus over sin and death. Interestingly, however, it just so happens that in Matthew’s Gospel, right before the narrative about the plot to kill Jesus in chapter 26, Jesus tells a story about the future. It’s the familiar story in chapter 25:31-46 about the sheep and the goats. At the end of our current age, Jesus will return, making all things right and all things good. Amidst the joy, however, there is also accountability.

Put simply, sheep did the right thing. The goats didn’t. And the consequences are significant to say the least. Here is the twofold element of what is so shocking in this story: the sheep were surprised that they were being commended while the goats were equally surprised that they had missed the mark.

The sheep had so integrated habits of hospitality and compassion that they were shocked to realize their actions were “unto me” [me being Jesus]. The goats had so insufficiently established similar habits that they were equally shocked. I can just imagine a contemporary parallel for the goats’ response: “Jesus, remember the time I cut a check to the church in 2006? I’ve even done that a couple times since!” The sheep, the ones who had been faithful stewards, are commended. They probably didn’t even remember the moments Jesus brought to light – times they faithfully gave of themselves and their resources, their time and their talent, their all. But they were rewarded greatly for this.

Hospitality matters to Jesus. Matthew records this story right before the account of Jesus’s suffering on the road to the cross. It is unfortunate that the word “hospitality” often brings to mind a lazy afternoon in Alabama on a wrap-around front porch complete with straw chairs and sweet tea. This is certainly a fine example. But it does not stop there. Hospitality can take on a very rough edge. It can demand much of us. The “least of these” often do not smell or sound particularly nice. And that’s just the beginning.

What is important to note amidst the triumph of Easter is the radical nature of discipleship in the footsteps of Jesus. We rejoice as we serve others because we are freed from being only concerned with ourselves. Jesus himself – God – was concerned for the needs of the created world. As we follow in his footsteps, we too should live lives centered not on what we gain from others, but in how we give to others – and ultimately, to Jesus himself, who somehow, according to Matthew 25, actually receives hospitality from those he created. In this we rejoice greatly.