Yesterday began just as the four weeks that have preceded it: Kaile felt heavy, tired, worn and I felt a bit tired but also overly ready to welcome a new life into our family.

I brought Kaile a bowl of cereal after Silas woke up [we haven’t set an alarm clock in over a year]. After she finished, she headed to the bathroom. Soon, I heard a sound I have heard so often over the past month: low groans.

The moaning soon blossomed into early labor. Quite similar to our first birth experience with Silas, over several weeks Kaile’s cervix had slowly dilated and effaced to four, five, then six centimeters. But with Maelin, the process took longer, and Maelin didn’t appear to want to leave the womb. A week prior, we had been at the birth center one evening for a full four hours, only to return home tired and disappointed.

Earlier this week on Tuesday, we had said our goodbyes to my parents who had been in town since September 17th. It hurt to see them leave, especially since we had such a long window of time with them-ten days during which we would have loved to celebrate the birth with their support. We had hoped their trip would be rewarded with the experience of meeting their third grandchild. But their time came to leave, and Silas came back home with us; we both wondered again if the baby would ever come. We now had the responsibility of caring once again for our toddler as the infant inside continued to wait, which didn’t exactly make daily life easier.

Back to the morning groans.

As Kaile continued labor, it became apparent that this was no false labor; this was as real as the moment twenty months prior when Silas was ready to enter the world. I called Mattea, our doula, then Julie, the on-call midwife at San Francisco Birth Center.

Earlier in the morning our friend Taryn had texted Kaile from down the street asking if we needed anything from the market.

Kaile texted to tell her were all set.

Not less than 30 minutes later, I called back asking if she could take Silas-we were having the baby!

The timing was no less than perfect. As it turned out, the window of time Kaile went into labor was in the middle of one of the few breaks Taryn has from her three children every week.

With Mattea, our doula, on the way, I raced downstairs to meet Taryn and explain a few details regarding care for Silas. She gracefully took him with her, and I fiendishly made my way back up to our fifteenth floor abode. Kaile was now retching in pain: contractions were coming too consistently to track. Kaile told me she was feeling the urge to push. I told her to breathe and, well, we breathed [heavily!].

I glanced around the apartment, picturing what it might be like to try to catch a baby there. Would the midwives come to us if the baby couldn’t wait? I called Mattea again to see if she could come *a little sooner*.

Mattea made some minor adjustments to her SUV’s velocity and arrived several minutes later.

Once again, the race was on, but at least now we were together.

The 20 minute ride down Mission Street, over to Franklin, then west on Geary felt more like 20 hours. We circumnavigated some a couple great hills in the city, and this challenged Kaile’s ability to remain centered, but we made it-and just in time. We made our way painstakingly out of the car and up to the third floor.

We had been hoping for a water birth, but since we were unsure of the timing for the baby, we hedged our bets and kept low expectations.

Nevertheless, Julie, the midwife, seemed to read our thoughts. She filled the large bathtub with warm water. Thankfully it had a high volume nozzle. Soon, I was in my bathing suit and Kaile was moving from transition-the final step in labor-into the first stages of delivery. In other words, our stressful moments in the car and our hilly trip to the birth center had contained much more of the labor process than we had imagined. And yet, she was doing perfectly, and her body was tracking right along.

I gave some pressure on her hips during the approximately 12 contractions she experienced at the birth center, and scratched her back in-between.

Before either of us expected it, Julie was preparing us for the inevitable. I subtly asked Mattea if there was a mirror. Since I was behind Kaile, it was impossible to see Maelin from my angle. Later I discovered Kaile wasn’t thrilled about the idea-but she was quick to forgive.

Moments later, I watched as a tiny head appeared. Even through two feet of water I could clearly tell our child had a full head of hair. Julie calmly told Kaile, “Okay, now a couple more big pushes; push your baby out!” That was the first time Julie had said anything about pushing-Kaile’s uterus had been working overtime for over two hours [or, more accurately, 10 months!], and Kaile had trusted her body to carry the process toward completion.

So that’s what she did-she did her first strong push. Joining her cognitive and physical strength with her body’s natural effort, progress became quite apparent. Julie’s coaching and Mattea’s words of encouragement were a soothing balm as Kaile continued her work.

She had been leaning forward on the tub, but Julie suggest she lean back on me for the final moments. She shifted, and as she leaned back, I held her legs out and toward me, allowing space and openness for baby to proceed.

Soon, I could see the whole head-and of course that was the hardest part. Seconds later the shoulders and abdomen followed, and before I realized what had happened, our infant, stubborn as he had been, rushed out into the warm water. Julie carefully lifted Maelin up and placed him on Kaile’s chest. A soft cry followed: he had exited the womb and officially entered our family. 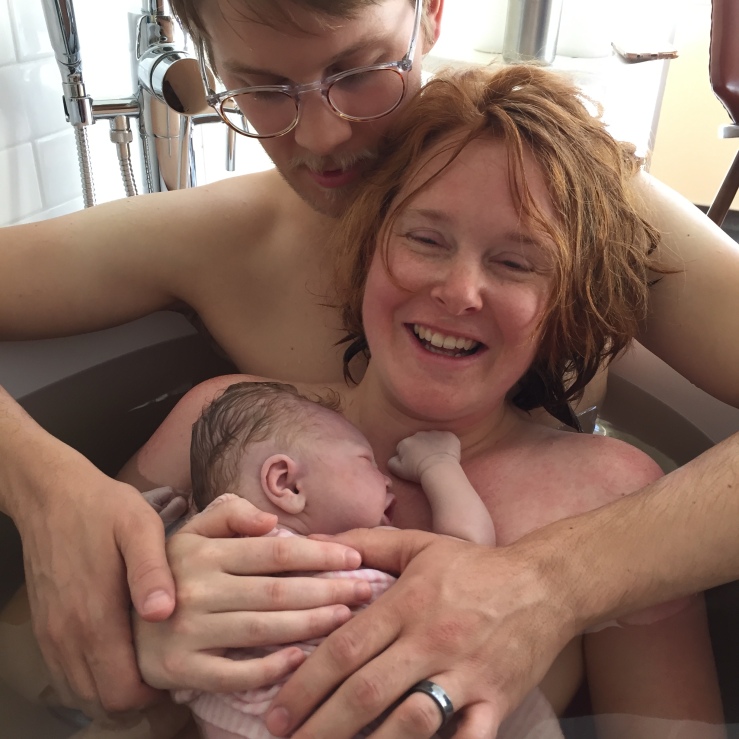 Up to this point, Kaile and I still didn’t know if our Maelin was a boy or girl. The only moving piece was the middle name. Had we become parents of a girl, the middle name would have been Junia. As much as I enjoyed taking in the moment, my curiosity was piqued: I had to know!

Carefully, I lifted up our still-purple child, and without as much as a trace of a doubt, I beheld a boy child. Silas now had a younger brother, separated by only 20 months [to the day!].

Kaile and I are both still processing all of the past few weeks [and year as well!], but here is a deep spiritual reality that I’ve gleaned from the experience. In John 16, Jesus explains to his followers that he would be leaving. They’re confused, as they often are, and Jesus unpacks what he means, likening his coming departure from earth to the experience of a woman in labor:

A woman giving birth to a child has pain because her time has come; but when her baby is born she forgets the anguish because of her joy that a child is born into the world.

It’s curious how Jesus uses the gritty events of life to speak to spiritual truths. And yet, though Jesus departed, he unleashed the Holy Spirit to be even closer than he would have ever been. It’s curious too how the Son of God entered human existence not through a magical appearance, but through Mary’s womb. Why the risk on God’s part? I don’t have answer for that, but welcoming Maelin Hosea into our lives reminds me how vulnerable it is to be an infant. It’s certainly curious that God chose to get involved with humankind in the same intimate fashion.

Our hearts had been longing for Maelin to join our family, and indeed he has finally come to us. And as we celebrate his presence in our lives, we are reminded that he is a gift from God, a blessing and a sign of the love God has for all people: big and small, old and young.