Internally, everyone wants things to be a certain way. Whether in the world, in one’s community, or in one’s own life or even one’s soul, we all have a sense of how life is fundamentally supposed to be like.

As a kid, I remember so vividly the pain my mom experienced after her mom died of cancer. It crept up on her so quickly, and seemingly without any warning. She would be grading papers [she taught Spanish, English, and French] and suddenly she’d be in tears after some small trigger memory of Virginia Kester.

Even when I was little I knew death was a terrible thing. Things weren’t the way they are supposed to be then-and decades later, it’s no different.

And I think we all relate to this in some way or another.

We desire peace when things feel chaotic or violent; we long for harmony in relationships when connections with others feel fragmented; we search for health and well-being when we or a loved one is sick.

Jesus taps into this feeling in his famous Sermon on the Mount. And this world-shaking sermon [I don’t think that’s an overstatement in the least] begins with an sermonic upending of the systems and powers that seem to govern our world.

The term *blessed* means something along the lines of God-favored, happy, and at peace. Jesus is telling us that either right now or in the coming age, we are blessed when these things happen [or we act in these ways].

3 “Blessed are the poor in spirit, for theirs is the kingdom of heaven.

4 Blessed are those who mourn, for they will be comforted.

5 Blessed are the meek, for they will inherit the earth.

6 Blessed are those who hunger and thirst for righteousness, for they will be filled.

7 Blessed are the merciful, for they will be shown mercy.

8 Blessed are the pure in heart, for they will see God.

9 Blessed are the peacemakers, for they will be called children of God.

10 Blessed are those who are persecuted because of righteousness, for theirs is the kingdom of heaven.

11 “Blessed are you when people insult you, persecute you and falsely say all kinds of evil against you because of me.

12 Rejoice and be glad, because great is your reward in heaven, for in the same way they persecuted the prophets who were before you.

Now if this isn’t the exact opposite of what’s normal, I’m not sure what is. Jesus’s way of seeing things is akin to turning every single cultural value precisely on its head. As an obvious example: when is it blessed to mourn? Or, out of the average 100 people, how many do you think are truly pure in heart [as I write this, I’m doubting whether I would fit the category!]?

A few years back, I saw a map like the one below and thought to myself, gosh, that would be so strange to flip north and south. Then I awkwardly realized that flipping north and south also flips east and west. California would be the east coast, and Maine would be super far west! And Canada looks a bit like Africa with lots of water and ice gaps. 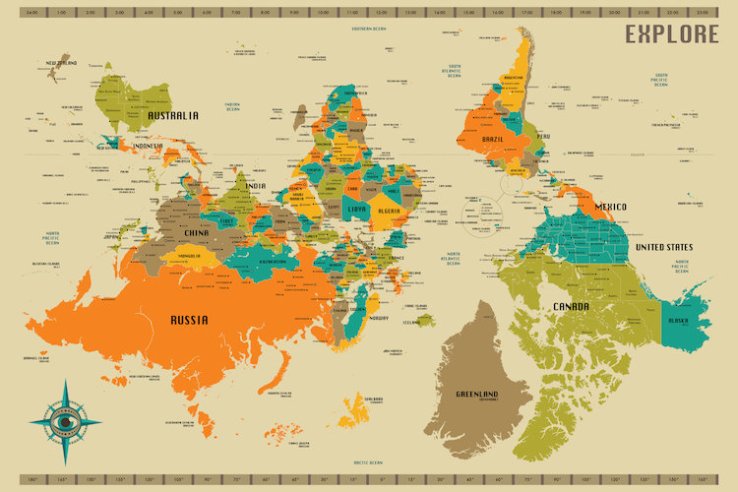 Just as my perception of the world was radically jarred by seeing from a different vantage point, I recently thought through how Jesus’s words stand so starkly against the way we typically see things in American culture. Here’s my annotated version of the sermon on the mount from my American cultural vantage point [and remember, I live and work in Silicon Valley!] ::

3 Blessed are the rich in spirit since they’ve obviously got real motivation to press forward with their fitness, career, relationships, and… everything else. #goals

4 Blessed are those who don’t need mourn, because the gods have obviously smiled upon those people so much that they don’t experience any real setbacks in life. #brightside

5 Blessed are the driven, for they will inherit the earth [or at least a good position in the company with some sweet benefits and stock options]. #getitdone

6 Blessed are those who hunger and thirst for being outwardly seen as a good person, for they will be honored among their peers and in magazines-and probably seen as wonderful, philanthropic people. #humanitarian

7 Blessed are those who know when and when not to show mercy, for they will be seen as kind and giving people. #love

8 Blessed are those with a pure criminal record, for God will see that and be totally impressed. He’s not worried about the affair that stayed quiet after decades. #sopure

9 Blessed are the peace-desirers, for they stir the pot on Twitter and have just the right thing to say about every news headline; and their sayings make people talk more about justice. #dumptrump

10 Blessed are those who are not persecuted because of anything, for they’re obviously toeing the line and getting along with everyone pretty well. #getalong

11 Blessed are you when people don’t insult you, persecute you, or falsely say all kinds of evil against you because of the things that you stand for. #staycool

12 Rejoice and be glad, because great is your reward on earth, for in the same way the empire prospered in ages past, it prospers now when you follow these key tenets for successful living. #motivation

Not sure if these alternative beatitudes are much of an exaggeration, honestly. If I look in my own soul, I oscillate between terror and frustration when I see my own inclination to my list of *revised* beatitudes. There are some that strike closer to home than others [like verse 10!].

Anyway, I think there’s something within each of us that longs for Jesus’s version to be true, whether or not we even care at all about the guy. We want purity of heart, I think. If God personally offered to offer any one of us the gift of a pure heart, would we not accept it?

And wouldn’t we all love to inhabit a world where meek people were honored and given a special place? I’ll bet we’d all appreciate working for a meek boss.

That bit about hungering after righteousness, too, makes me imagine what the world would look like if everyone actually lived out lives of deep integrity. Marriages would flourish! Political and business corruption would disappear! Prisons would empty! Racism would be quelled, and marginalized people would be honored.

Imagine if we so elevated peace as a virtue that we finally decided national interest are less important than human lives. Our wars would cease, and bullying would end.

If we imagine deep within our God-breathed consciousness, we can relate to desiring to see God’s kingdom being made real and tangible in our world. We can picture the end results of living as Jesus is inviting us to live: how things are supposed to be.

But, for some reason, it’s so hard to create the kind of seemingly upside-down world that looks like what Jesus is identifying. Thankfully, we also learn in Scripture that God is ultimately making all things new, that heaven and earth will eventually be made one, that the church is the bride of Christ and is set apart to play a key role in bringing about this upside-down kingdom.

We who are Christians insist that God is offering to impart the teachings of Jesus to us, through the power of the Holy Spirit. We actually think God’s kingdom is made visible through such spiritual transformation.

Have you met someone who sees God deeply present in their life even as they experienced a divorce, powerful addiction, or disease?

I’m telling you, this stuff is real.

If we don’t even believe this stuff, we still relate to the desire for Jesus’s way of seeing things to be the status quo. We all have the commonality of imagining how things are supposed to be.

And what if this isn’t all just some strange religious fantasy? What if the beatitudes actually became the norm through the power of God working to make all things new? What if we all just lived as if his teachings were true?

What if the map we’re all reading is upside down?

One thought on “The World Is Upside Down.”