Father Richard Rohr has popularized the need for male initiation rites, and the following quote tells us why:

If a young man never experiences his own powerlessness, he will eventually abuse his power.

I’ve been dwelling on this concept for some time now, and it has really struck home with me over the past couple years.

In these past couple years, we have experienced a lot of change as a family. We have moved four times in the past two and a half years: Grand Rapids, Michigan to San Francisco; a cross-city move to the Sunset neighborhood; a move to Sunnyvale in Silicon Valley; and finally a move to a first-floor unit in our apartment complex a week ago [yeah it was close by, but trust me, there is still a lot of work involved!].

I lost a job. I struggled. I somehow maintained a calling. I gained a job. 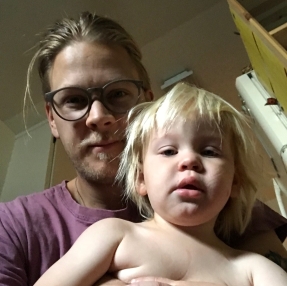 We added, in God’s grace, a second son to our family. Yes, he’s cute; he’s also in the middle of tantrum season.

Though it taken some time to realize this, out of the four of us, I think all this change has especially affected me. Mine has been a journey into powerlessness, a journey into a land where I learn that I am not my own. Instead, as the Heidelberg Catechism famously puts it, “…I belong – body and soul, in life and in death – to my faithful savior, Jesus Christ.”

I have wrestled with this lived reality. I have felt the absence of power when I ask my kids to do something and they ignore me. It is only after a lot of time and work that I have found ways to cajole, enjoin, invite, and plead them into obedience – and obedience still happens only a certain percentage of the time!

It’s only by God’s grace that our kids are okay. When I think of the myriad ways they could suffer, I am overwhelmed. Sickness of the body or mind, accidents, the potential trauma that can come through painful experiences in schools or elsewhere, I am reminded of what my heart knows:

I have felt the absence of power in my work life. My work as a pastor constantly reminds me of how little I can convince people of their need for God, the larger purposes we are called to as human beings, or what it means to be our true selves as Jesus intends. But God consistently does these things – and often in spite of me.

The meaningful and life-transforming things happening in my church and in my youth group have little to do with my efforts and much to do with the strong movement of God through the Holy Spirit. I am a tired dad most of the time, stuck with sore muscles, sustained too often by Cheerios and chicken nuggets that my kids don’t finish. I often simply stand by, witnessing the power of God working in others. But I myself…

This isn’t to say I have no agency or influence on the world around me. No, that’s not the feeling of powerlessness I’m trying to capture here. I do have a voice, and I do my best to use it effectively. Through the tiredness, busyness, and sore muscles, there is progress. God is good.

As the subject of powerlessness keeps banging around in my head, I’m reminded of a fascinating piece of writing from ancient times. Paul, writer of about 1/3 of the Bible’s New Testament, writes about a “thorn” in his flesh. Clearly it is a metaphor for, well, something that plagued him much of his life.

Was it a physical pain? Was it an emotional brokenness? Was it a speech impediment?

Whatever it was, it was something that apparently kept him humble and God-dependent for his whole life. In the text, he goes on to share about how wanted God to take away the thorn. He struggled with it, begging again and again – three different times – for God to fix this problem.

But the answer he received from God was patently clear:

My grace is sufficient for you, for my power is made perfect in weakness [II Cor. 12:9].

I cannot help but find myself attracted to the way Paul internalized this paradoxical divine response to his plea. It really seems that he gets it:

Therefore I will boast all the more gladly about my weaknesses, so that Christ’s power may rest on me. That is why, for Christ’s sake, I delight in weaknesses, in insults, in hardships, in persecutions, in difficulties. For when I am weak, then I am strong.

That final line resonates powerfully with the words of Jesus in his earthshaking Sermon on the Mount. Here’s the Message version of 5:3:

You’re blessed when you’re at the end of your rope. With less of you there is more of God and his rule.

Now as I take a step back, I look around my world and I can’t help but notice that no one wants the blessing of being at the end of their rope! Most of us are instead making plans for relational power, financial success, and physical wellness. We want money, influence, fame, security. We want to travel lavishly, eat awesome food, and perfectly groom our social media presence, preferably with the help of the latest iPhone. We want take high resolution pictures of our Danish furniture, nice rugs, breathtaking art, and fast cars. We want our Twitter feed to be lively.

We don’t *really* want to be powerless.

I’ll bring this home by reflecting on something I mentioned in my last blog post on science. Dr. Kent Irwin, a particle [and astro-] physicist who does primary research at Stanford’s SLAC lab and who has also experienced the power of God to heal and transform lives and bodies [he goes to my church], said this:

A lot of people don’t experience or trust God because they’re so smart, good looking, or wealthy. For some reason, God seems to have a preference for stupid, ugly, and poor people.

Ironically, places where I most directly experience my powerlessness are often the places I most powerfully encounter God.

I’m only one voice among our world’s 7-odd billion, but this has been true for me. Jesus’s words ring true-I am blessed when I’m at the end of my rope. When there is less of me there is more of God and his rule.

A few years ago I was in Paris, trying to meet with friends. I say *trying* because the first night, I was unsuccessful. The address was indistinct and though I asked a number of folks in the neighborhood, I could not find the apartment. As the night wore on, I became exhausted. The hostels and even the hotels were full, not that I could afford them anyway. Finally, I collapsed in a city park, clutching my backpack.

When I awoke I realized my glasses were missing. Soon, reality dawned on me. My glasses were the least of my concerns since I was also missing my iPad, passport, and about three hundred Euros.

At my lowest point, I was walking somewhat aimlessly in the rain toward where I thought my friends were staying with three Euro coins jingling in my pocket.

And I had to pee [which required money] so that wasn’t really an option!

Eventually I found where I thought my friends were. But they were out on the town, probably at the Louvre or whatever. I told the owners my story. They were clearly reading the signs written all over me, and they promptly offered me the best tasting French food I’ll probably eat in my lifetime – fries, a sandwich, and soda.

It was a glorious reunion, needless to say, when my friends returned. We had a really good time in the city before I packed up and headed to Spain where I met up with my brother who was living near Madrid.

We biked the Camino de Santiago, a rather famous trail with origin’s traced to the actual Saint James – like, the brother of Jesus. He’s got his own New Testament book, so he’s kind of a big deal. We covered about 500 miles over 11 days.

During the tour, one of the biggest conversation topics was whether or not I should pursue a relationship with a particular woman-Kaile Van Oene. I will never forget my brother challenging on the very things I needed to consider most deeply, matters of whether or not we would work out as a couple, challenges that we faced in terms of our different backgrounds. In frustration, I was coming to grips with my own powerlessness.

Back to Father Rohr:

If a young man never experiences his own powerlessness, he will eventually abuse his power.

How true this was for me back in the summer of 2012 – the first part at least, the part about powerlessness!

As we rode under the Spanish sun, my brother’s questions were ringing in my ears. Though we continued speaking, it was as if my brain was short-circuiting as I tried to make sense of things I couldn’t make sense of yet. I stopped my bike instantly, more or less throwing it to the ground then marching off into a field. Staring out into a field of sunflowers with a cerulean sky over me, I was in tears. The hot breeze enveloped me as I stood, searching the heavens as the Creator of the heavens searched me. But, in my powerlessness, I knew one thing:

I wanted to marry Kaile.

Though I didn’t have all the answers, I did sense God reminding me that I’m enough; that Jesus was advocating for us; that the Spirit would direct us. We were okay then and we’re okay now, not because of our careful planning and hard work but because of lavish divine generosity.

Our bike trip continued for a few more days and my memories of it nourish my soul quite often, maybe monthly or a number of times per year; but my marriage with Kaile sustains me every day.

God was present in my powerlessness.

And with less of me, there was a lot more room for God.