In my last post I shared about how my beloved guitar was sadly stolen from our Volvo on Thanksgiving Day in a smash-and-grab theft.

Today, I want to share about how I’ve experienced the cycle of hope that I alluded to in that post.

Not long after I shared on my blog and in social media about the smash-and-grab, a great friend, Mark Aubin, took it upon himself to act. He quickly set up a GoFundMe drive to allow folks to help me replace the guitar and cover the $290 that the window cost to repair.

The feelings that stem from this kindness sit in two categories:

Something about the generosity of friends is incredibly humbling. I freely share with anyone and everyone that we have enough, that we are ok financially, but that we also don’t have much excess. Rent is $2250. Grad school courses are $1100/credit hour. Whatever your financial situation, you probably relate – life is expensive!

My Western [American?] individualism was offended. And that’s a weird thing for me, but really good for my soul. I’m not on my own, I’m not made up of my own accomplishments, and I’m able to exist because I’m interdependent on others.

Now, the guitar and the story of how I came across it.

Years ago, a college friend had a gorgeous Tacoma jumbo that I was privileged to borrow fairly often. At the time I couldn’t afford an American-made acoustic.

After my guitar was stolen, I eventually thought back to that Tacoma. I then immediately searched eBay and Craigslist to see if there were any still around. Turns out there are a few of these American-built instruments on the market, but only a couple in the SF Bay Area.

I checked out some other legacy American builders like Taylor, Guild, and Martin, and there were some great options. But the Tacomas I found had all the build quality – but with a lower price point.

After mulling things over for a few days, I contacted the owner of one of the two or three available locally. It was the best value by far, and came in its original case. I had to know what it sounded like. I still don’t feel comfortable buying a guitar sight unseen, because guitars turn out differently, each with its own unique timbre. Even the same model from the same maker can have significant differences.

My parents happened to be in town, so I set up a meeting, and drove to Pacifica with my mom to meet Jaime, the owner of what would become future guitar.

The interaction was about as perfect as I could never have planned it. We chit-chatted about how his wife is from Detroit and how they’re thinking about moving there. When I told him I really wanted it, we moved on to a conversation on precisely how much money it would take for him to let it go. That’s when my mom interjected with the sad story of how we were robbed on Thanksgiving Day. That did it, I think, and instead of $650 I paid an even $500.

Once I owned the guitar, I immediately began thinking about amplification. The guitar came with a passive transducer, but I wanted a more balanced system. Transducers tend to bring out bass tones really well, but can sound metallic, and they often leave aside the rich mid and upper range tones.

Going back to my research, I sought out a system that included both a transducer pickup and a microphone. LR Baggs is a company that has been doing amplification for acoustic instruments for a long time. It’s their main thing. Naturally, I had to investigate.

I quickly realized I needed to decide between the Anthem Tru-Mic and its streamlined version, the SL. The Anthem system uses a small microphone under the bridge to bring out tones from the soundboard, but pairs the microphone with a transducer under the bridge.

This is the thin transducer that picks up vibrations under the saddle. I hadn’t finished installing it when I took this picture; it actually sits in that little track under the beige-colored saddle.

Underneath the bridge, the curved brown wood piece seen to the right, the microphone is installed. Fundamentally, these two pieces of hardware are working in tandem to “hear” the guitar. Amplified, an acoustic guitar should sound just like it does unplugged. This system comes pretty close, in my opinion. 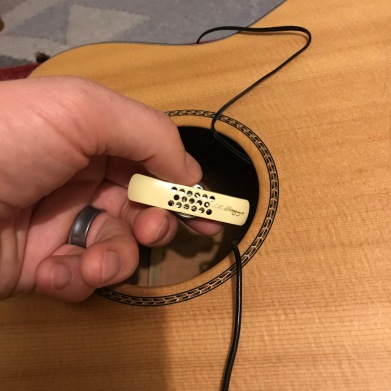 To the left is the microphone, which is supposed to be fairly resistant to feedback. I don’t play in super loud settings, but I’m sure life will eventually provide opportunities to test this claim.

I had to reach inside the body of the guitar to install this crucial component. Leaving two bridge pins in to help guide me, I had to go by feeling; the pins helped me know I was under the bridge. I [bravely?] removed the adhesive, then placed it snugly, making sure other wires were out of the way, leaving space for the transducer wire to come through a small hole that was drilled for the old system.

At this point, the most difficult aspects of the job were complete, and I just needed to route the internal wires with adhesive tabs and install the volume and mic control unit. Since the volume control is mounted right inside the sound hole, it was simple. A nice feature of the Anthem SL is the small mic-level control.

To adjust it, however, you need a small philips screwdriver, but since it saves space, allowing for a smaller adjustment unit, it makes sense. The $299 Anthem control has a full-size control slider for mic level, but it adds a lot of size to the unit.

Anyway, I didn’t know if I had done everything right, but as I reflect on the installation process there wasn’t a whole lot that a professional could have done that would have been different.

The best test was playing my newly-appointed instrument through a system. Unfortunately for me, I typically play through a system at my church on a weekly basis, so I had to wait. I also didn’t know if it would even work.

So, during the normal stress of any given Sunday, which includes setting up my room for youth ministry related stuff and organizing my thoughts and emotions, I hooked up my new guitar.

Meaning, it sounded almost exactly like it does when it’s unplugged.

While it still feels a bit too much to receive such a generous gift from friends, I am posting this to fight the feelings of pride that tell me I can keep a stiff upper lip and march on without any help. God created us – and me – interdependent. I’m not an island, and I’m worthy of grace. God’s grace, yes! And so often he pours his grace through people. 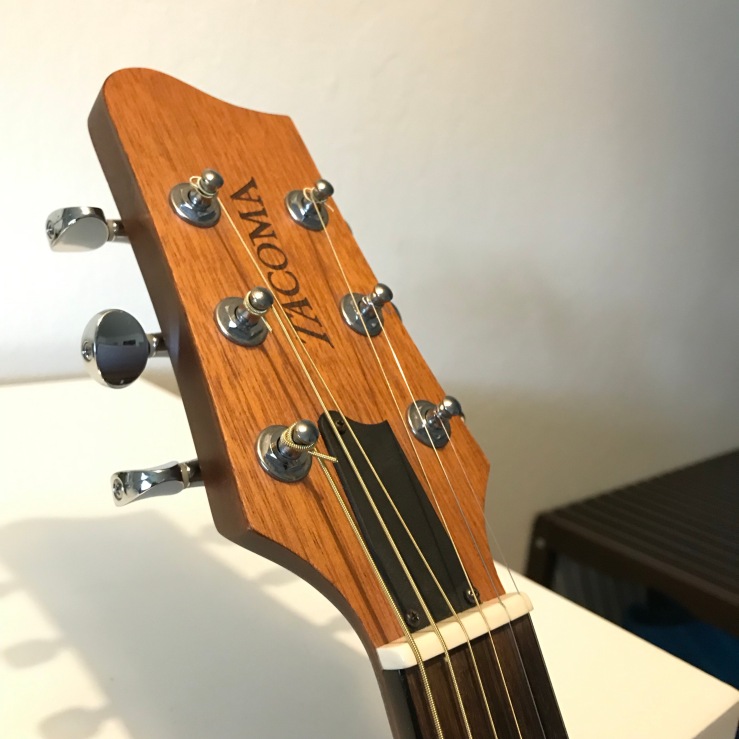 One thought on “the love of friends / my new guitar”