A little while back, our family watched a classic 1973 film: Charlotte’s Web.

How rare is it to find a movie that a two year old can enjoy as much as his thirty-something parents?

Anyway, Charlotte’s Web is a fun yet powerful exploration of friendship, change and transience, death, and coming-of-age.

Death is a theme that isn’t much fun to talk about, but it’s a reality. Not one of us can honestly expect to escape death, though we Christians insist there is hope beyond the grave. We call that New Creation, a time when God brings all things fully back into right order, a time when heaven merges with earth and we experience restoration of all that had been lost. Heaven comes down.

But death sits between that eventual hope that lies beyond us.

And death is Silly as it probably sounds to someone older than me, I’m noticing how sore my 31 year old body gets after just a few minutes of an exercise I’m not used to – recently I ran just a few city blocks and ended up sore in quads and shins for no less than a full week!

Soreness, sickness, stiff joints, tiredness; all of these are the waypoints that point to our eventual grave.

ARE YOU DONE READING THIS YET!? I PROMISE IT GETS WORSE BEFORE IT GETS BETTER!!

There was a scene in Charlotte’s Web where Charlotte, who had befriended Wilbur the piglet, finally died. She had always encouraged Wilbur about his concerns that he’d be slaughtered for meat, always advocating for her large pink companion.

In the film, the music swelled as she ducked behind a rafter in the barn. Her final web blew away in a gust of wind, and all trace of her physical self disappeared. Even as she left indelible memories behind, she herself was no longer there. Check out the clip on YouTube here. 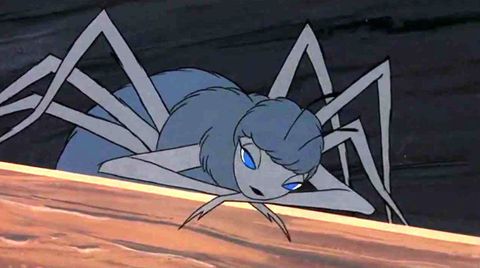 As I tucked Silas into bed, he was clearly in a reflective mood. The movie was clearly a lot for a four year old to imbibe. Laying next to him and staring into his bright blue eyes, he asked a question:

At once I loved and hated the question.

And I cried [sorta surprisingly hard!] for some time with Kaile after I prayed with him and tucked him in for the evening.

Silas, in his own little way, was grappling with the concept of death and finality of living beings, arachnid and otherwise. And though I am filled with hope for his God-given future, I am yet distraught as I watch him wrestle with the pain and brokenness of our world.

I didn’t [and still don’t] know the perfect age to speak to him about the reality of death, but I know he’s asking questions about some central aspects of the human experience.

My wife Kaile pointed out to me during my sad post-Silas’s-bedtime moment that part of my sadness may have been stemming from seeing the connection between my own coming-of-age and Silas’s: I lost my grandmother right around the same age as Silas is now.

I’ll never forget the trip to my grandparents home in Northwest Arkansas – the Ozarks. It was 1991. Grandma was sick – that was all my brothers and I knew. But it was altogether evident when she vomited at lunchtime. I don’t know how exactly I dealt with the feelings at the time; I was four. But it hit me at some level that grandma was really sick – and though I didn’t know what eventually happened to sick people, I knew it couldn’t be good.

After my grandma died, I think somehow I changed, though I cannot pin down precisely how. There was an inner melancholy that surfaced deep in my soul, a quiet recognition that things around me were apt to shift without my permission.

I’ll never forget the sleeplessness I experienced one summer evening after a family trip. We had gone to the Carolinas, just my brothers and parents, and visited beautiful beaches and bays and – naturally – Charleston.

Sleep eluded me because I had a sense that I’d never again experience those things again.

When I was halfway through high school, my brother was making the shift to college, and wrote a beautiful poem about his shift away from the intimacy of our family life and into a life of his own. He likened himself to a deer braving new meadows and forests, also hinting at the possibility of eventual return to his former pastures.

After he read it, my mom thought I was laughing, but as I retreated to my room, sobbing into my pillow, she quickly realized she had mistaken my loud cry for some kind of giggle. I ended up having a really meaningful conversation with her later about things of the heart.

So back to my Silas, some nights ago, asking where Charlotte went.

If you click the link to the scene from the movie, you’ll notice that toward the beginning that Wilbur offers to give his life for Charlotte. She had sacrificed for him, and he reciprocated.

“But you’ve saved me, and I would gladly give my life for you.”

Instead of despair, though, I’m filled with hope. God is making all things new, all things right and good, eventually reuniting heaven and earth. All the sadness and loss will eventually be swallowed up in Christ’s victory over death. The love God showed us in Christ is too big, too strong, and relentless against any and all opposition. Love wins the day, in and through Jesus.

Amidst the changes and chances of life, may we lean into the eternal changelessness of our loving God.